Here we will set-up the development environment for being able to develop Silverlight (and WPF Too!) applications on our machine.

After the teorical overview on the last post, we must install all the necessary in order to be able to proceed into the “hello world” usually done on new languages or environments :).

We should have already installed the runtime plug in (that is if you were curious enough on last post) but if not, we can install the 1.0 version recently released (or RTC’ed) at http://www.microsoft.com/silverlight/install.aspx. or the more powerful version 1.1 September Alpha Refresh at http://www.microsoft.com/silverlight/downloads.aspx#4_8. Have to say that this version is more oriented for developers as it is an Alpha, and also interesting to read the installing reccomendations before proceeding. Silverlight 1.1 includes 1.0 so, there will be no need to install this if we proceed with the 1.0.

Anyway, if the links aren’t working you can find almost all of the downloads of the components here and/or here.

Documentation, samples & add-in’s – With all the development & design tools installed we should get the SDK’s of what we are going to get into. We should install this great resources:

Well that has been more or less all. Quite longer than I expected but quite complete too. Please leave your comments and indications abut how did you like this article.

Silverlight’s appearance means more than just “another flash”, it’s a real development framework inside our browser, it’s far more than just more performance for displaying animations and videos in high quality on our browsers and doing these in a better-faster and cheaper way!!

Ah, and as it is a text format (xaml) it’s also serchable by search engines 😉

We can affirm that Silverlight is a subset of WPF with some architectural changes and it has two versions, one RTC-ed some days ago, the Silverlight 1.0 version which has already a nice subset of the .Net framework and it is programmed with javascript and XAML.

This version already allows us to develop sofisticated applications that take profit from xaml’s ease of use and tools that support the development of this language, very similar to xhtml but far more powerful.

The 1.1 Version, is far the most powerful thing I have ever seen. The pain is that it is still not complete and it lacks some functionalities to show all the (business) .net power, as databinding and 3d support that makes WPF so great.

Here is an image (courtesy of Microsoft) that shows the differences between them: 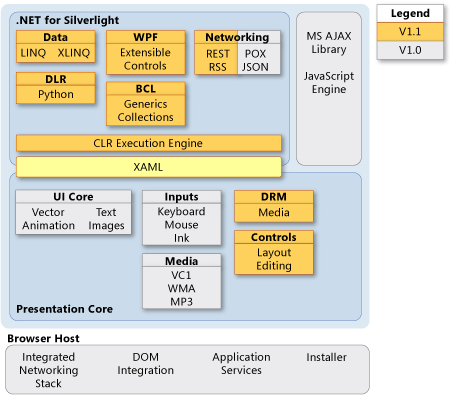 You can see that 1.0 allows communicating with JSON and POX with external applications and we have all the basic UI Core functionalities at our disposal. Also the integration with the browser and containing html’s DOM is quite nicely done. As for the 1.1, to say that has LOADS of new capabilities and components. It still lacks some to be a real jewel but has almost all the main .Net core & most interesting namespaces packed into 3 to 4Mb.

You can watch a more detailed comparison of the two versions here.

There are great demos of what can be done with this first version that has nothing to envy to other browser plug-ins. It has just been born and it already works on macintosh, linux, pc’s and most of the browsers of the market… quite a great start-up.  I reccomend that if you’re unfamiliar with this technology, go to http://silverlight.net/community/communitygallery.aspx and watch some of the samples there… you’ll be amazed. Of course you’ll be asked to download the plug-in, it is about 1Mb the Silverlight 1.0 plug in and 3 to 4Mb (going down on size!) the Silverlight 1.1 Alpha preview plug in. The 1.1 includes the 1.0 so, no need to install both.

You can also compare performance of this environment with the bubblemark project, here.

The results say, in Alexey Gavrilov words; “WPF runs faster than anything else. The unexpected is that WPF/e is faster than Flash despite the fact that it’s been in the market for years“. You can find the results comments here. Ah, WPF/E was the code name for Silverlight, before it was launched.

As for more information, there are quite detailed introductions (mine has been quite general) you can read:

On next posts we will install and set-up a development platform for being able to start coding and touching this great technology.

More to come & thanks for reading 🙂